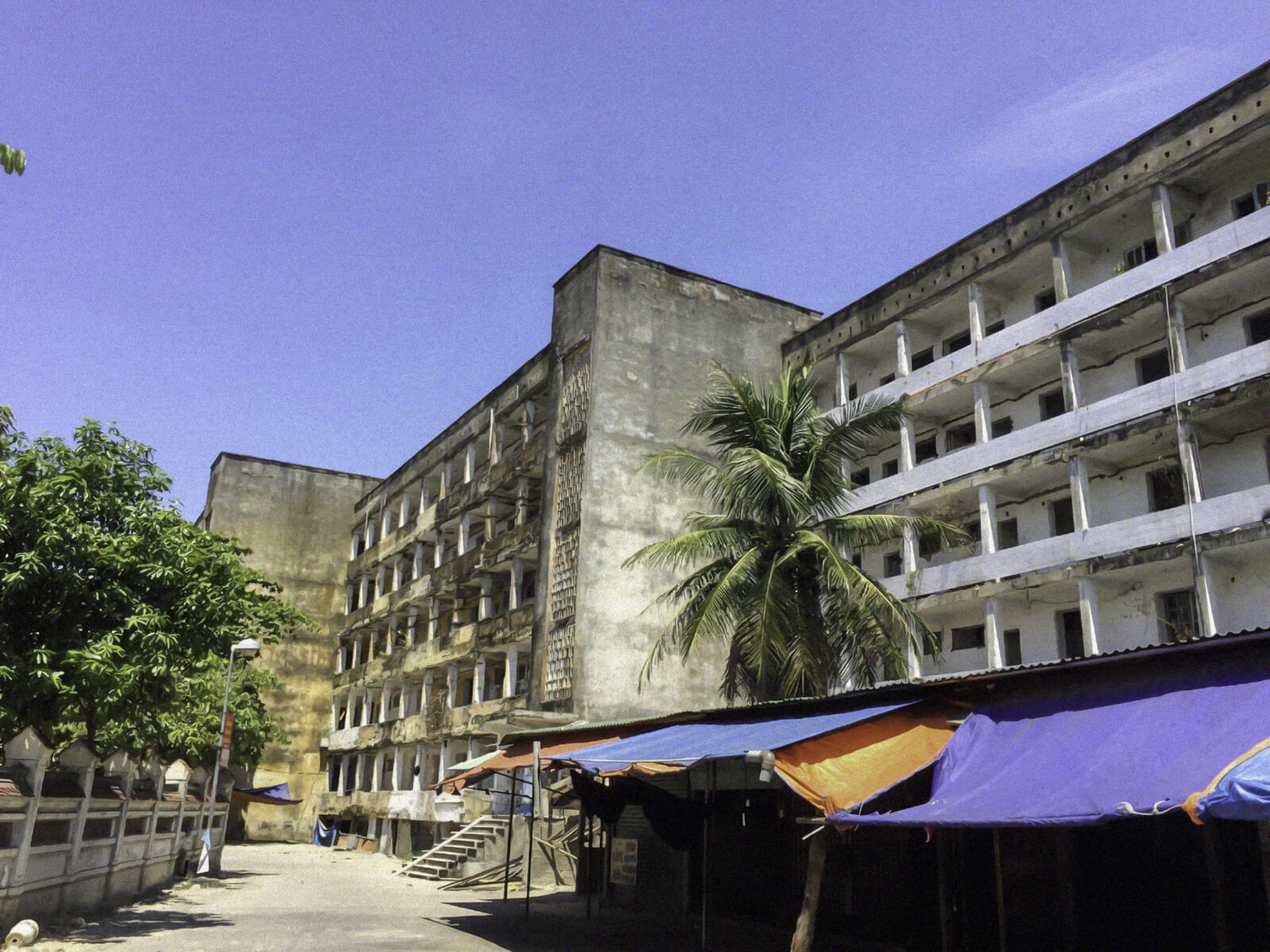 The DDR Apartments of Vinh

By 1972-3, the Nghệ An province capital city of Vinh had been leveled by years of relentless American bombing campaigns. Vinh is a port city on the north-central coast that served as a staging point for war material imported from the USSR to make its journey west to Laos and then down the Ho Chi Minh Trail into South Vietnam. In January 1973 the Paris Peace Accords were signed, and Vinh exhaled. The bombing stopped. A mere handful of structures in the city remained intact, and the provincial government set about rebuilding.

It was determined that Vinh, as one of North Vietnam’s first cities undergoing major post war renovation, would be a model for a new socialist architecture in Vietnam. The Vinh government contracted with a team of East German architects and engineers on an early project to construct socialist apartment blocks in the new city center. Rather than extensively consider Vinh’s climate conditions, rural character, and the practical spatial needs for the new city, DDR and Vietnamese experts determined that the priority was to use the project to design and plan a city that visually represented Marxist-Leninist ideology.

The team ultimately did this by delivering a dozen or so apartment blocks that were carbon copies of those built in Soviet and Eastern European cities in the post-WWII era. My guess is that they probably used original drawings from East Berlin apartment blocks. The city very likely had a housing crisis in the early 1970s, and the Vinh government promptly distributed these brand new apartment units to Party members and those who had served meritoriously in the revolution.

The apartments weren’t a great fit. Unlike East Berlin, Vinh is scorching hot and off-the-charts humid. The units were poorly ventilated, and the reinforced concrete would have made for very high temperatures inside. They were also quite small, which made a difficult adjustment for locals accustomed to living at ground level in small houses with accessible gardens and windows. Vinh is a “country-city,” if there is such a thing – it’s not cosmopolitan New York City or London by any stretch. Instead, it feels more like a big village.

Thus, the new residents of these apartment blocks were probably puzzled as to how they were going to grow small gardens and keep livestock in an apartment block. But they adjusted, and over time residents quietly added lateral additions, building out and rigging balconies onto their little apartments to accommodate chickens and open air kitchens. The ceilings of many of these apartments show the effects of years of joss stick burning at family altars. Petty merchant families figured out how to re-engineer their apartments to billet small shops.

Over time, they developed into a patchwork of socialist realism improved upon by the Vietnamese handyman. The final indignity of these DDR apartment blocks was how much they contrasted with the low-rise city that was slowly rebuilding around them. Vinh was developing as a typical city of ordinary shophouses, around a nucleus of blocks and blocks of bright gold East Berlin apartment buildings. It symbolized the tension between the ideological direction of a unified Vietnam and a city of people that probably just wanted to come down from decades of mobilization and war and get started on living regular lives for the first time.

I took a train from Saigon to Hanoi in 2009 and stopped in Vinh specifically to see these fascinating apartment buildings I had read about. I drank a few glasses of bia hoi with some local fellas and got back on the train that evening. I wish I stayed longer and took photographs, as the next time I got to Vinh, in 2019, the DDR apartments were finally being torn down. The second visit, however, did allow me the opportunity to take pictures and explore the interiors of these abandoned hulks imported from East Berlin in 1973.

If for some reason you are a weirdo and as interested in this niche topic as I, I recommend reading Christina Schwenkel, a University of California professor who has written about the DDR apartments in Vinh.