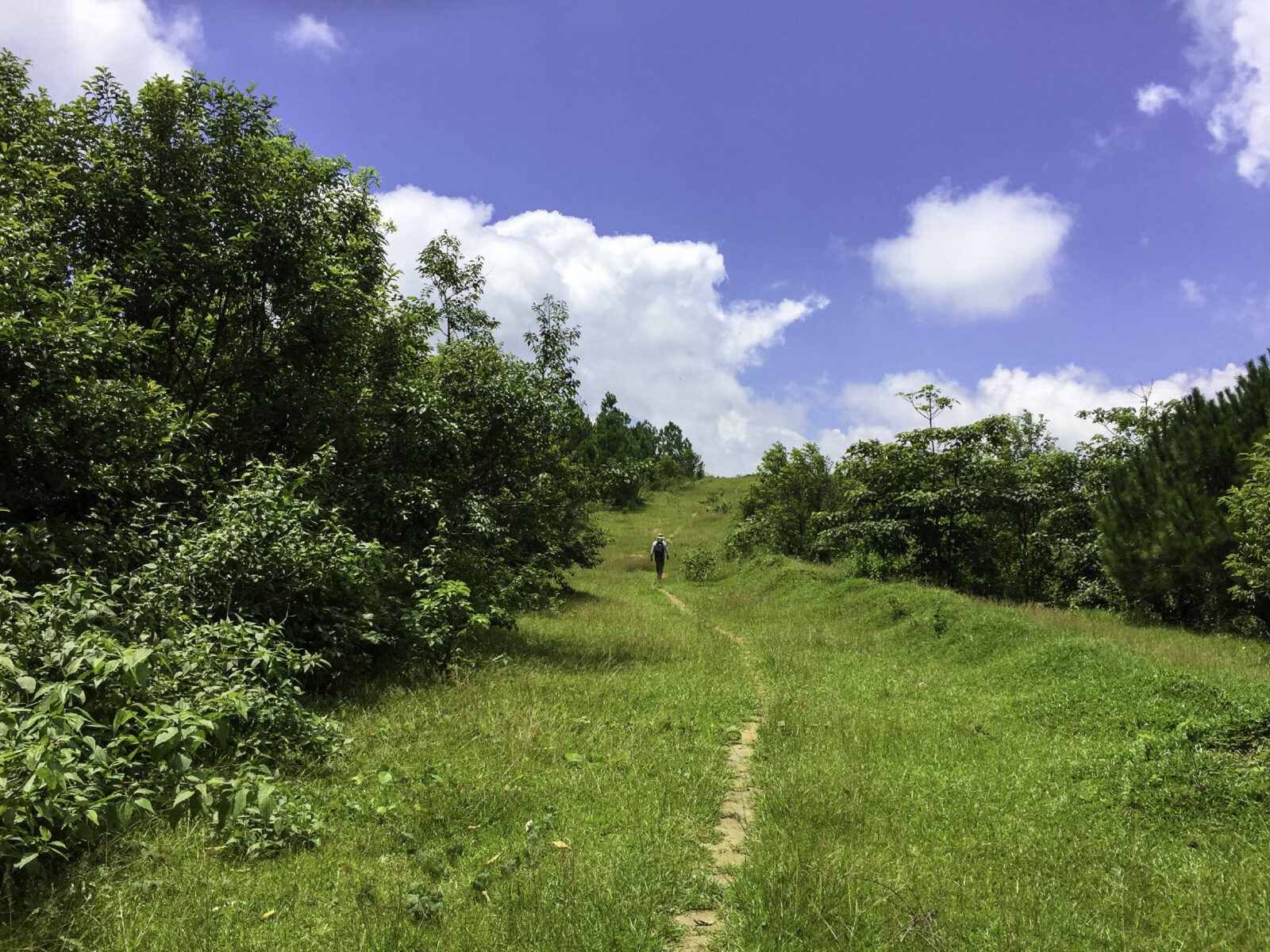 Hills 861, 881 North, and 881 South were the site of intense United States Marine Corps combat with the People’s Army of Vietnam throughout 1967, in the run up to the Khe Sanh siege that actually began in January 1968. The “Hill Fights,” they are called: over the course of many months, the Marines and PAVN contested the high ground around Khe Sanh. The Hill Fights are also referred to as the First Battle of Khe Sanh.

In April 1967, units from the Third Marines based at Khe Sanh were ordered up Hill 861, one in a cluster of three hills overlooking Khe Sanh a few kilometers to the east. Their mission was to establish an observation post and position there. It was part of an effort to move defenses outward from Khe Sanh to further secure the combat base. Once they got to the top of 861, they were ambushed by PAVN forces that had been quietly occupying the hills that overlooked Khe Sanh for some time already. Over the course of the next two weeks the USMC counterattack turned into a large and violent operation.

As things turned out, there were about 2,000 PAVN troops on the three hills and ultimately 1,500 Marines were sent up to clear the area. Marines were then sent up neighboring Hill 881 South, and after a lull on top, they came under heavy attack from camouflaged PAVN units that had been dug in and waiting in the forest of conifer trees. Several hours of airstrikes followed, as the Marines were trapped. By the time the Marines descended the Hill 881 South the following morning, they had lost 43 killed and 109 wounded.

With the Americans off the summit, the real artillery and air strikes started. After weeks of heavy fighting and bombardment, the PAVN withdrew from the Hills and back into Laos. But they had lost 1,000 men, and the Marines had 155 killed in action. The Hill Fights continued to percolate throughout 1967.

Apart from the rare Marine Corps veteran that returns or the occasional PAVN that stops by, these hills simply aren’t much visited. They are quiet and pretty scenic. From the summit, one can see the hills of Laos in one direction, and a Central Highlands valley and river in the other. Khe Sanh Combat Base itself is much more understandable from this height, as it sits in a valley behind a hill a few kilometers to the east. You can’t exactly see the Khe Sanh site, airstrip, and museum, but you can make out the ring of peaks that surround it. It’s clear that without a large commitment of U.S. troops to occupy those hills, Khe Sanh Combat Base was vulnerable. The Dien Bien Phu comparisons make sense although there were never really any other similarities.

I have been to Hill 881 South two times. The first time was in 2018, with Annam Tours owner/ guide Van Ngoc Vu, as well as a local guy who brought a shovel with him. Hill 881 was then a pretty untouched site. The idea was to dig around spots that the scrap collectors had dug and filled years ago. I wanted to get a sense of the garbage that remains in these places. We’d driven up the hill on a rough and steep road that winds through Montagnard villages and brings you to the summit of three hills that comprised the Hill Fights. Hill 861 now houses a major radio antenna, and the summit is still littered with bomb craters. We walked about a kilometer into the woods and found the remains of a Marine position on Hill 881 South.

There is still UXO at the summit of Hill 881 South-cluster bomblets and a mortar round were still sitting there, along with other refuse. Finding the soft earth site of a former foxhole, we dropped shovel. There’s lots of garbage buried there, just under the surface. Toothbrushes, playing cards, medicine bottles, pieces of K-Bar knives, M-16 cartridges, 50-caliber slugs, exposed film, torn pieces of backpacks and raincoats, government-issue insect repellent, MRE bags, and the remains of sandbags. This garbage had been sitting there for 50 years.

Then we noticed the leeches. Christ. They were crawling all over the three of us. We got out of the site with all due speed to remove the bastards, which was not pretty. Buffalo and dairy cows bring the leeches into the jungle with them, and a herd had recently passed. The leeches sit on leaves and grass at about knee height. Then they leap onto passersby and get to work. To think that the Marines on Hill 881 South may have had to constantly contend with leeches here, in addition to all of the other unpleasantries of combat in Vietnam, is awful. Keeping leeches off oneself is a full time job. The parasites were just one more thing on the list of their miseries.

The second time I made it to Hill 881 South was less successful. I was on my own this time, and for some reason couldn’t find the specific Marine foxhole site I’d visited earlier with Vu. It was in between those two visits that I began contributing to Nam War Travel. Unlike the first visit, I was ready to take a hundred photos the second time around, but I simply couldn’t find it. All photos here are from my first visit.

Hills 861 and 881 South are up a few kilometers and across the Ho Chi Minh Highway from Khe Sanh Combat Base in the former DMZ. A small local road does run to the summit, but it’s crap and some planning, and certainly a good guide, is needed. Visiting the sites of The Hill Fights makes for a good add-on to a visit to Khe Sanh.

11 thoughts on “The hill fights around Khe Sanh”