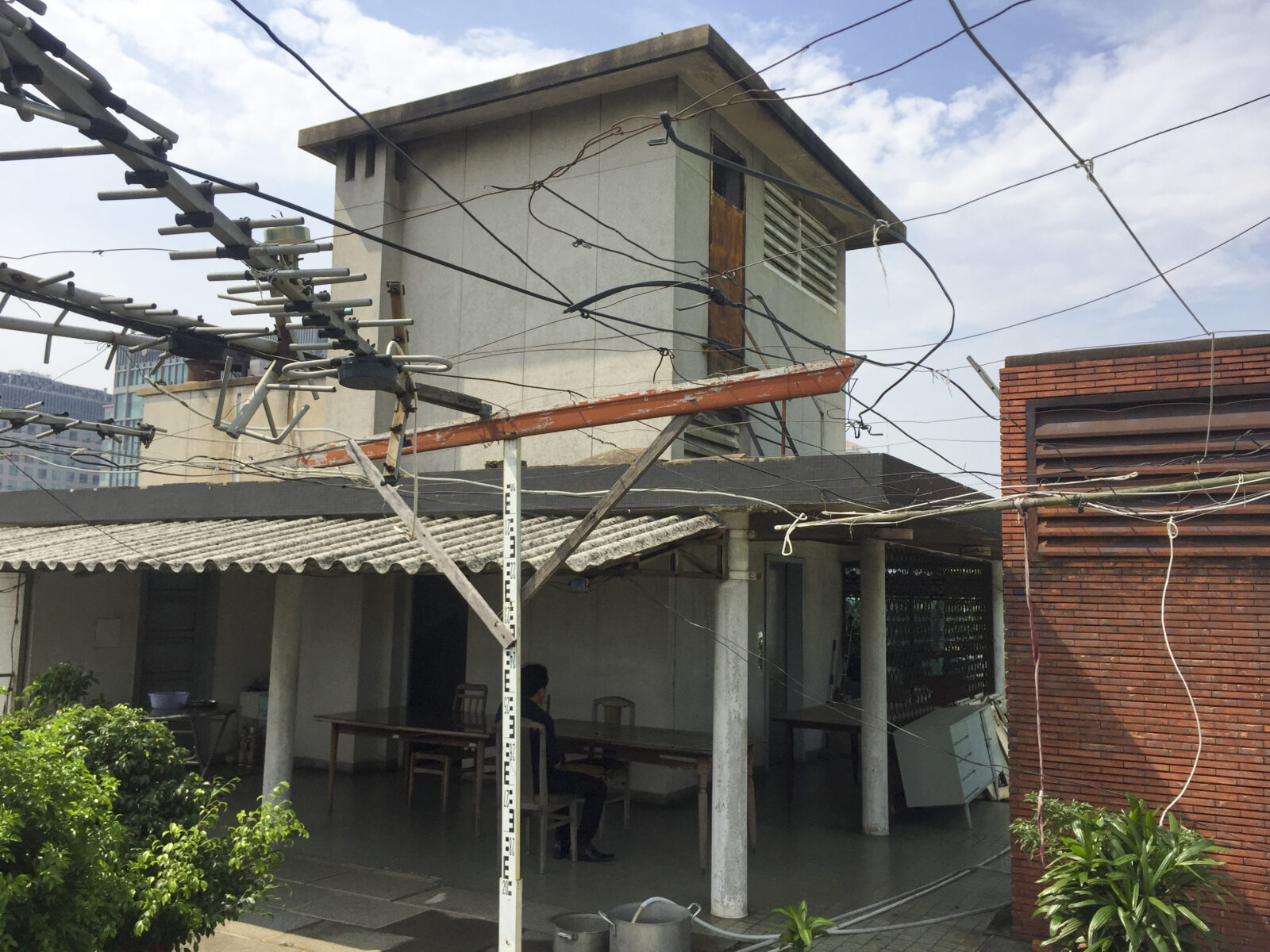 A few blocks away from where the go-go bars were once clustered on Dong Khoi Street, the mid-20th century Pittman Building and its infamous rooftop utility shed stands in contrast to the massive and more recent vintage Vincom Tower. You don’t necessarily see it right away, but when you do notice it, you know exactly what you’re looking at. It’s unmistakable. The rooftop of the Pittman Building is the subject of one of the 20th century’s most famous photographs, taken by the Dutch UPI photographer Hugh Van Es on the 29th of April 1975. It was on the top of this modest rooftop shed that the decades-long Vietnam War finally ended.

Today, the exterior of the Pittman Building on 22 Lý Tự Trọng Street, then Gia Long Street, looks much like it did in 1975. Many parts of Saigon still do. Yet inside, it’s contemporary spartan Ho Chi Minh City, not glamorous pre-1975 Saigon. The ground floor lobby is spacious, and largely empty. There are a handful of cheap couches in the lobby. It seems like every time I pass by, there are guys loitering on those couches, phone in hand while smoking cigarettes. Cutting deals of some kind. It’s such an ordinary Vietnamese scene for such an extraordinary place.

I visited about a month after the 44th anniversary of the fall of Saigon. Two o’clock in the afternoon. It was lethally hot on that roof. Unlike many of Saigon’s more recent constructions, the Pittman Building was built to last. It’s still in good shape. Ironically, the Ho Chi Minh City government has been talking about razing the Pittman Building for years. Real estate is just too valuable in this neighborhood. But then it could also be because the Pittman represents a strain of history that doesn’t assimilate well with a push to transform Ho Chi Minh City into a place without history. The old French Post Office and the Cathedral are fine. But places like the Pittman, not so much. It’s all about newness, foreign direct investment, development and modernity. But, they haven’t leveled the building just yet.

What’s in the Pittman Building today? Weirdly, half a dozen different State-Owned Enterprises doing business in the chemicals sector. As in, all Pittman tenants are chemicals SOEs. Floors 1-8 have been repurposed. The roof itself doesn’t seem to have changed much. The famous shed is by all appearances as it was in 1975. There’s a rusty door to get into the shed itself, but it’s locked. Someone has scrawled “The Fall of Saigon” into the rust (see photo).

The roof is home to two gardens. Perhaps odd to a visitor but extremely routine for Vietnam, is what’s on the roof: the ubiquitous concrete tables and benches, tea sets, and “thuoc lao” (tobacco bong) that are part of the landscape wherever people gather, loiter, make small talk, and idle in this country. It’s a pretty relaxing and peaceful spot, especially in contrast to the streets below.

The former Deputy CIA Station Chief’s top floor apartment has been refurbished as a chemicals enterprise office. I understand that the remainder of the building’s apartments until 1975 were USAID apartments, but there was a lot of gray area between USAID and the CIA back then. Nonetheless, more chemical companies, some State-Owned Enterprises, some labeled Joint Stock Companies. But there’s a lot of gray area between SOEs and JSCs in modern Vietnam. I poked my head into a couple of the old USAID apartments and saw the omnipresent red banner with gold font reading “Đảng Cộng Sản Việt Nam Quang Vinh Muôn Năm!” or The Glorious Communist Party of Viet Nam Shall Live Forever!Otherwise, empty rooms, copiers, boxes, cheap desks, ashtrays, empty boxes of War Horse cigarettes, calendars, and wood paneling. It could have been any small office building in Vietnam.

As I made my way down the stairwell, the scene from 1975 was easy enough to imagine. It would have been packed with military and civilians trying to make their way to the roof. There would have been more people in the lobby. Suitcases, bags. Probably a few escapees dressed in evening wear, totally unprepared for a sudden helicopter flight to an offshore United States Navy aircraft carrier. There would have been muscle guarding the front door and trying to ensure the Pittman Building didn’t get overwhelmed by crowds. There would have been a lot of noise. Loud talking, yelling, choppers flying in and out. Arguments, aggression. Frantic street traffic. The sound of ordinance and distant gunfire. After the final chopper departed, those still present would have eventually had to start figuring out a Plan B or C and find the motivation to get moving again. They were probably stunned.

I stumbled upon a first floor cafeteria that presumably serves all of the chemical companies housed in the Pittman. I interrupted two cafeteria ladies that were cleaning up, and like most Vietnamese that serendipitously meet a Westerner, they were charming. They hammed it up for photographs. I told them I was interested in the history of the building, and they replied with “Well, the cafeteria is closed. Sorry.”