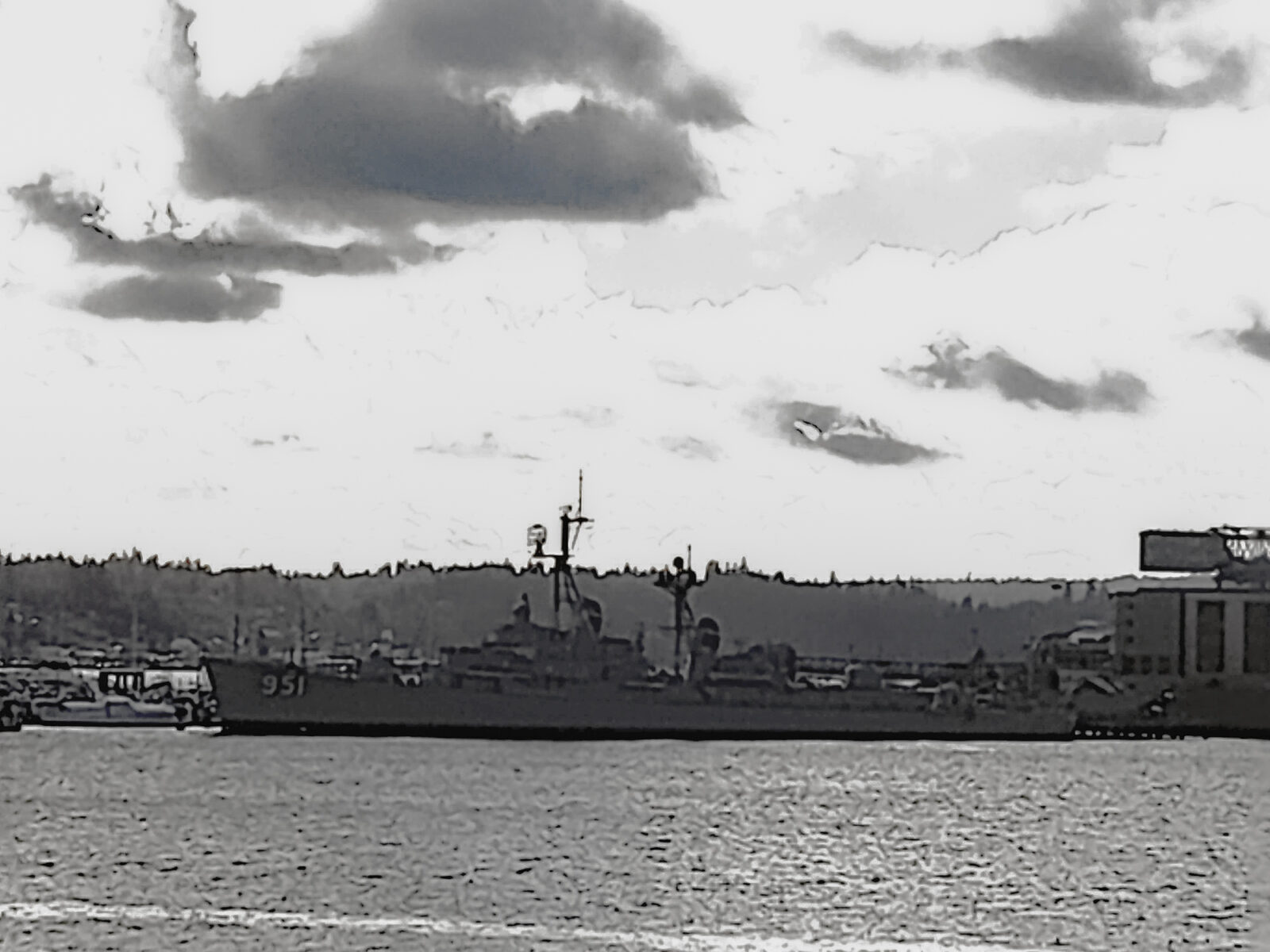 If United States Navy Forrest Sherman-class destroyers could talk, well, this one would have a few stories to tell.

The tale of one of the 20th century’s major turning points is familiar. The USS Turner Joy, along with the USS Maddox, were at the center of the 1964 Tonkin Gulf Incident, in which the two destroyers purportedly came under attack by North Vietnamese torpedo boats while sailing in the strait between Hainan Island and the coastline of Nghệ An and Hà Tĩnh provinces. In July, the Maddox had been patrolling offshore from the Democratic Republic of Vietnam on a DESOTO mission whose purpose was to collect and relay signals intelligence to Saigon. Since early 1964 the Army of the Republic of Vietnam had been running covert patrol boat missions and commando raids that targeted northern installations on small islands in the area. Tensions in the Gulf of Tonkin and along the DRV coast were already high in the summer of 1964.

We now know that the US Navy was both monitoring communications and identifying targets in support of these ARVN commando operations. American warships on DESOTO missions often provocatively sailed well within DRV territorial waters, sometimes as close as 14 kilometers offshore, which was well within range of a destroyer’s deck guns.[1] A day or so after an ARVN gunboat raid on a DRV radar installation on Thanh Hóa province’s Hòn Mê island, the Maddox did a close-shore sail near Hòn Mê. Hanoi mobilized three torpedo boats and two gunboats from navy bases in Quảng Ninh and Nghệ An provinces to pursue the Maddox, and on 2 August 1964 they caught up with the destroyer about 40 kilometers offshore. The vessels fired torpedoes, but the destroyer returned their fire, evaded the attack, and with the help of aircraft from the nearby carrier USS Ticonderoga, damaged one torpedo boat.

Escorting the Ticonderoga, the Turner Joy was ordered to reinforce the Maddox and jointly continue the DESOTO mission.[2] On the 4th, both destroyers responded to what they thought was a second attack by another group of torpedo boats, taking evasive action and calling in air support from the Ticonderoga. The Turner Joy fired about 250 rounds at a cluster of approaching dots on its radar. False radar images, termed “Tonkin Ghosts,” often resulted from bad weather and choppy seas in the Gulf; the weather was poor on this particular night, and specialists jumpy from the earlier attack may have rushed to conclude that they were witnessing a sequel. Despite the crew’s belief that the Turner Joy and Maddox were under fire again, as well as their assertion that they had sank multiple torpedo boats, reconnaissance missions seeking evidence in the form of oil slicks, fires, or floating debris found nothing in the following hours and days. None of this information casting doubt on the second attack seems to have made it to top decision makers in Washington. The United States commenced the retaliatory Operation Pierce Arrow hours after the supposed second attack, sending 64 carrier-based sorties to bomb Vietnam People’s Navy installations along the coast. Piloting one of those sorties was Everett Alvarez Jr., the first American to be shot down and taken prisoner in Vietnam; he spent the next eight years in Hanoi’s Hỏa Lò Prison. In a joint session three days later, Congress gave President Lyndon Johnson near total authority to prosecute a war in Vietnam under the Gulf of Tonkin Resolution, with only two opposing votes out of a total of 504 cast.

Over the years since, due to changing stories and judgments from those involved, Hanoi’s emphatic denial of any torpedo boat missions that night, and official inquiries that cast doubt on early accounts, the events of 4 August 1964 remain something of a mystery. A US Government study concluded in 2005 that the first attack happened, but the second attack did not. Former Secretary of Defense Robert McNamara admitted in the 2003 documentary film The Fog of War that the second attack did not happen. Context is helpful. After several years of unsuccessful counterinsurgency campaigns, political repression, and sectarian violence that resulted in President Diệm’s assasination the previous autumn, the Tonkin Gulf Incident took place at a time when confidence in South Vietnam’s long-term viability as a state was at a nadir. It would be easy to conclude that the United States in 1964 was looking for ways to take on a more overt role in the conflict and hand over the job of preventing Saigon’s collapse to the American military. Irrespective of what was on the minds of American policy makers, that’s what happened: they characterized the Tonkin Gulf Incident as an unprovoked communist attack on US navy ships in international waters, opening the door to a ten-year commitment of about 2.7 million American personnel to the cause of defending South Vietnam. The United States got the war it wanted.

The Turner Joy returned to duty in Vietnam many times over the following decade. Pacific missions would last several months, and then the destroyer would then return to its base in Long Beach, California for refurbishment. The ship spent all of its service time in the Pacific and off of Vietnam’s coastline, running Sea Dragon patrols to interdict supplies before they arrived at Vinh or Hải Phòng, shelling I Corps, shelling Chu Lai, or patrolling offshore in the Mekong Delta. The Turner Joy was retired in 1982 and is today docked in Bremerton, Washington. The Maddox, on the other hand, was sold to Taiwan in 1973; it was eventually scrapped in 1985.[3]

Visiting the USS Turner Joy is easy; the ship operates as a floating museum open to the public just about every day of the year. The Bremerton Historic Ships Association, the nonprofit that maintains the Turner Joy, has restored the ship to its Vietnam-era condition and specifications. Bremerton is a small town on the Puget Sound near Tacoma, Washington. It’s the home of the Puget Sound Naval Shipyard, which is a 72-hectare facility that has been building, modernizing, and refurbishing US Navy vessels since 1891. At any given time, there will be multiple ships in bay for servicing, and docked here are also several mothballed Vietnam-era aircraft carriers slated for dismantling. One can do a self-guided tour of the USS Turner Joy, and nearly the whole ship is accessible. A few observations about the ship: with rough dimensions of 128 meters by 14 meters, at first glance it’s a large vessel. Yet the Turner Joy usually sailed with a crew of about 300, which seems like an awful lot of sailors to squeeze on board a boat of this size. Rarely were all 300 outside on the ship’s deck at once. Descending below deck, it’s clear that this would have been a crowded ship – most of the Turner Joy’s four below-deck levels are crammed with boiler rooms, engine rooms, supply rooms, radar rooms, generators, multi-deck machinery for reloading the deck guns, and the odd mess hall. That’s it; pretty much all available space is engineered and functional. Interspersed are about 150 bunk bed – foot locker units, and the men slept in claustrophobic quarters with all of the ship’s pipes, generators, wires, control boxes, dials, communications devices, and valves. Below deck, the Turner Joy feels a bit like a submarine. The Turner Joy was also lean and fast. Referred to as “tin cans,” destroyers from this era had extremely thin armor and had a top cruising speed of around 32 knots, which is well nimble for a ship this size. There were no real anti-aircraft guns on the Turner Joy; its main defenses were its ability to move quickly and make sharp turns.

The USS Turner Joy is reputedly haunted. In September of 1964, the ship was shelling NLF positions near Chu Lai when one of its three deck guns misfired. When crew members arrived to clear the barrel, the shell detonated, killing three sailors and wounding three. Psychics and ghost hunters have investigated the Turner Joy and claim to have communicated with spirits on board; the verdict is that two of the sailors that died in the incident now haunt the ship. Tour guides and maintenance workers have also reported seeing shadows, a feeling of being watched, and personal items going missing. The rear deck gun where the accident happened is now marked with a plaque commemorating the three sailors that died that day.

The Turner Joy fired the US Navy’s last round of the Vietnam War. The Paris Peace Accords mandated that all combat operations would cease at 08:00 on 28 January 1973. As the clock ticked towards this deadline, the ship was providing naval support to US Marines under attack on the western half of the DMZ. At about 07:59:15, the Turner Joy fired on an NVA ammunition bunker in the vicinity of the Marines. The round took 45 seconds to travel to and hit its target about 16 kilometers inland, arriving just before the deadline. Coming full circle, the Navy vessel that was so instrumental in the war’s massive escalation also book-ended its conclusion. Despite its monumental role in the opening and closing points of the war, visiting the Turner Joy to explore its pivotal role in the Gulf of Tonkin Incident is a quintessentially postmodern experience: what we commemorate here that took place in 1964 never actually happened.

[1] The Turner Joy was equipped with three deck guns that could fire a 127 millimeter, 32 kilogram shell a distance of 24 kilometers. These self-loading cannons could fire 40 rounds per minute.

[2] United States Navy Rear Admiral George Stephen Morrison was commander of US Navy forces during the Gulf of Tonkin Incident. Morrison was the father of Jim Morrison, singer for The Doors.

[3] The USS Maddox had an eventful life. Launched in 1944, the Maddox supported Pacific Theatre operations against the Japanese in the Philippines, Vietnam, and Okinawa. The ship received a direct hit from a kamikaze pilot off of Formosa in 1944. The Maddox also served throughout the Korean War, providing shore bombardments for UN forces and participating in the 861-day siege of Wonsan, North Korea.