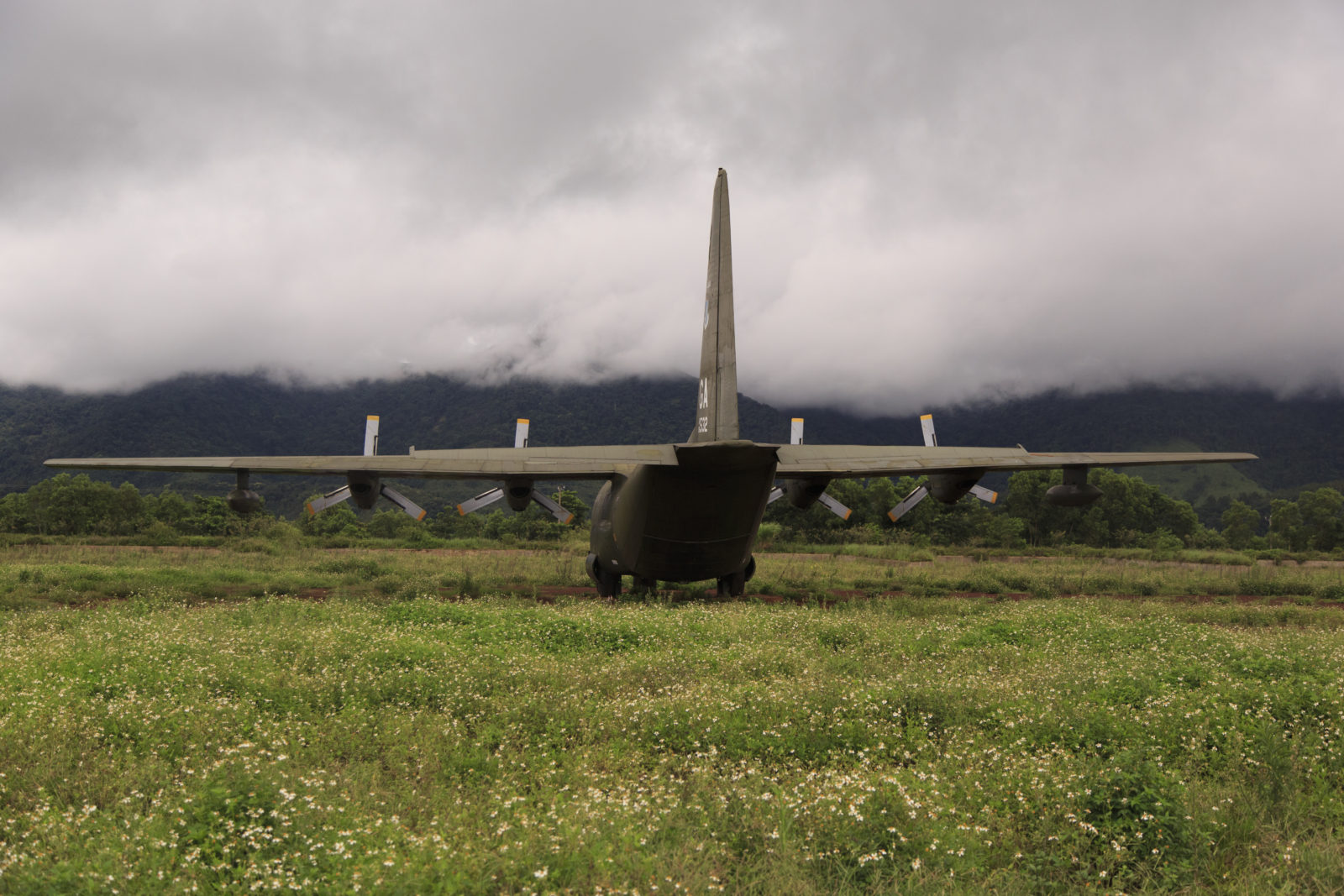 Once the scene of perhaps the most famous battle of the Vietnam War, the 77 day siege during and after the Tet-offensive in 1968. The battle was daily followed by American TV-viewers for more than two months and President Johnson kept a model of the area in the White House demanding daily briefings on progress.

After having spent months building up their forces in the vicinity of the base, north in the DMZ area and about 15 kilometers west across the border in to Laos, on January 21st North Vietnamese and VC forces finally unleashed the attack on this large base where over 5000 US Marines and other units were posted. Artillery hidden in caves in the mountains of Laos were continuously pounding the Marines.

As the siege went on and the Hanoi forces drew closer the US leadership even took the desperate measure of using the strategic B52 bombers as close air support, closer to friendly troops than they had ever been used before.

The situation in the camp was desperate as supply runs were difficult to make, as soon as US planes and choppers closed in on the base the artillery fire intensified, soon making it impossible to land on the airstrip so the Airforce had to drop supplies by parachute.

The strategic importance of the base was next to none, it was originally opened to keep track of the Ho Chi Minh Trail and put a stop to supplies entering South Vietnam. As the trail had moved over to the Laotian side Khe Sanh had more or less lost its importance. However, a big victory here for Hanoi would have been a big blow to the American war effort. The Tet offensive proved to be that anyway.

With U.S. and ARVN forces tied up in fighting across the country there simply wasn’t enough resources to get more troops up in the area until March when the relief effort in the shape of Operation Pegasus could be launched. U.S. Cavalry units together with ARVN units were shipped in and after 77 days the siege was broken. Fighting, however, continued in the area well in to May.

Khe Sahn was originally opened in Aug 1962 by Special Forces and occupied until December 1966, when it was turned over to the Marines that expanded the camp to suit ther purposes. The Special Forces then moved west closer to the Laotian border and the camp at Lang Vei.

Today Khe Sanh has become one of the most visited war sites. Pretty much every DMZ tour will have a visit to Khe Sanh on its itinerary. Since over fifteen years there is a museum building on the site of the old camp area. And as most of the UXO has been cleared the areas on and around the runway are accessible.

Less than twenty years ago the site was littered with UXO and other items hidden in the red soil. There was no access to the runway so one had to stay behind the fence by the museum and look over the site from there. Over the years most those items have been dug up and sold off for scrap metal or as souvenirs for tourists. But even to this day bullets, used shells and other items are found just beneath the surface.

Bunkers have been built to give the visitor a sense of what it would have looked like back then, but they have very little similarity to what was used on the and they are located in the wrong place, more or less on the former runway. On the north side of the runway there are still some old concrete revetments overlooking the valley.

The government have over time shipped several war era armoured vehicles, tanks and airplanes to the site, adding to the experience. We’re not sure what the ultimate goal is with this, but it seems it is to make this the most equipped war museum in the country. We know there is an American C-123 Provider that is currently being restored that will be shipped to the site also. The actual museum building contains a lot of interesting information and items. This is definitely a place worth visiting considering its historical significance and the resources going in to making this a proper museum.

Around the place is also a number of places of interest such as the hills just north west of the base, 881S, 881N and 861, the former SF base at Lang Vei is also nearby. The areas around where Operation Pegasus and the aftermath of that were carried out are of course accessible, one has to know the exact sites though as they are not marked in any fashion. We made a visit to LZ Peanuts where a large battle was fought on the 5th of May just a few kilometers west of Khe Sanh and it was a well worth effort.