The Mekong River together with The Bassac River together with hundreds of man made canals and smaller rivers forms The Mekong Delta. The delta was, and is, the rice basket of Vietnam and one of the main reasons North Vietnam sought to re-unite the country. Controlling and utilizing the water ways was of utmost importance for both sides during the Vietnam War. The Viet Cong and PAVN would infiltrate, bringing men and supplies, from Cambodia on land but mainly on the water. This meant that U.S. forces would set up bases along the river in order to block as much as possible of this activity.

Using PBR’s, nimble but powerful fiberglass patrol boats as well as the larger and more heavily armed Monitor boats, U.S. forces would patrol the rivers as well as the smaller canals, checking the local traffic on the river for weapons and supplies. Often getting involved in firefights as they were attacked from the shores.

Sa Dec and Cao Lanh are located about 15 kilometers from each other along the Mekong River, covering the strategic water ways north of Vinh Long towards Cambodia The towns being small, but important, U.S. forces had presence in both places with MACV Compounds, runways, helicopter pads, PBR docks and other installations.

Sa Dec hosted the MACV Team 65 during this period. Their compound was situated in the little town on one of the small peninsulas. Inside the compound, among the team buildings with quarters, offices and storage was also a chopped pad. Further west on the outskirts of town was the fixed wing runway that could receive aircraft as large as the C130. The 1000 m runway can still be found today, but is used as a road in town. We have driven the old runway and below you can watch a short video from that

At our latest visit to Sa Dec, we went to try to get in to the old MACV compound. From comparing old photos of the compound with modern day satellite photos it is clear that at least one of the old buildings is still left on the site, a larger French building at the south end of the compound. In below photo it is probably that building’s red roof that is visible.

We drove across the canal on a narrow bridge to get to the peninsula where the compound is located. As we got across, we expected to be able to drive down to the right in to the old compound area, but there was a wall and a gate saying this is now a school We continued around the area to the right, following a small road along the wall until we reach the end of the peninsula. It was clear that we could not get in this time. I had to settle for this picture from the outside only.It might still be possible to enter the area with a local guide though which of course we will try next time we get there. We learn something every time we visit the old war sites, making things easier for our next visit.

The PBR docks in Sa Dec were located along the small canal in town south of the compound and we have little hope of finding any remains as the whole canal has been built up along the banks. As we got on our way again to drive north up to Cao Lanh, we passed by the old water tower which is just across the bridge from the MACV compound a block or so to the north.

Traveling the area, one quickly realizes that within this limited geography, there would have been thousands of places to hide in the small canals and forested areas. Finding VC and PAVN infiltrators was literally like looking for a needle in a haystack, especially considering many of them were locals and knew the area better than U.S. troops and ARVN troops that mostly were not locals themselves.

Today there is a large bridge over The Mekong River from Cao Lanh located on the southern border of the Plain of Reeds, making the crossing so much easier. Not far from the bridge and the old ferry crossing is the old runway in Cao Lanh. We had set out to visit the runway this time and it wasn’t very difficult to find near an active PAVN base. The area is basically wasteland nowadays with a few shacks where workers seem to dwell. 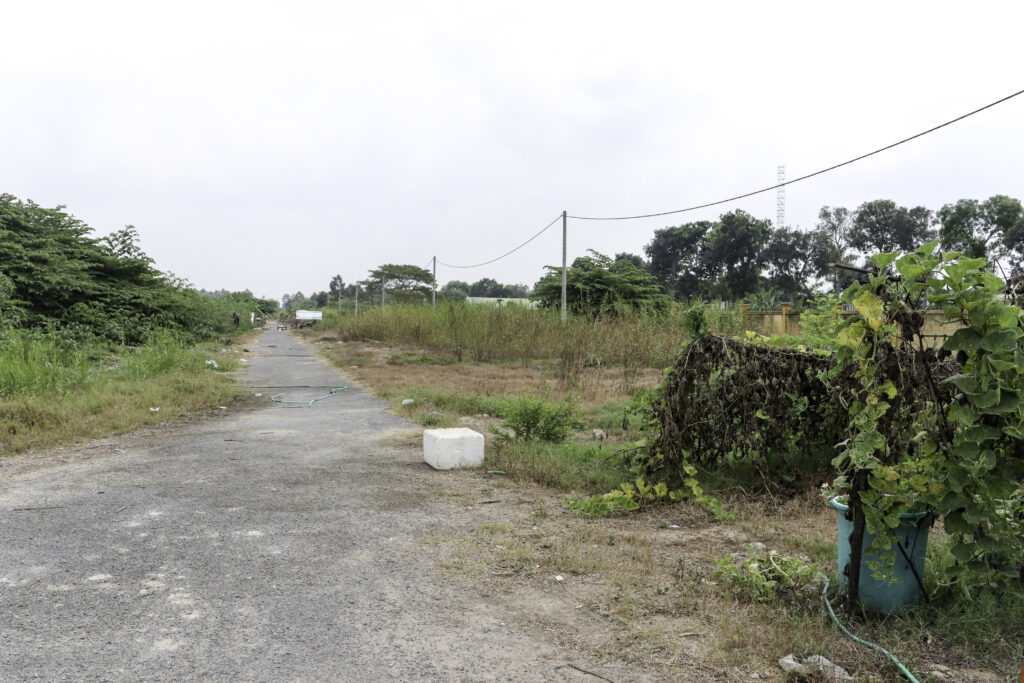 We drove around the area to see if there were any obvious traces of previous installations but all we could discover were the old water towers across the wall inside the army camp. And of course the stretch of the runway is partly preserved. Below is a video from our drive there.

In the town itself, there is more to find from the era. The old MACV Compound covered parts of what is now the town center. We believe there is at least one building left from the era, but we couldn’t find it at our visit there. What we did find was again the old water tower and the flag pole base that was in one of the yards inside the compound.

During the Vietnam War, it was the MACV team 50 that were stationed here together with other types of units making the camp buzzing with activity. With a 1000 meter runway, chopper pads and the boat docks, Cao Lanh was well equipped to cover its part of the delta and be a launch point for operations deep in to the Plain of Reeds.

As a general travel destination, the landscape is yet another breathtaking part of Vietnam. The mountains of the central highlands, the coastal plains and the serene valleys in between makes up for some amazing experiences and the delta with its own unique landscape is a match to any other part of the country. As soon as you can look beyond the houses that are lined up along the country roads, you are rewarded with the view of beautiful flatlands, rice paddies, pineapple and coconut farms and some of the friendliest people you will ever meet.

The best and easiest way is to drive from Saigon via My Tho. For those who want to discover more in the delta, staying over in Vinh Long is possible as well as in Sa Dec and Cao Lanh.