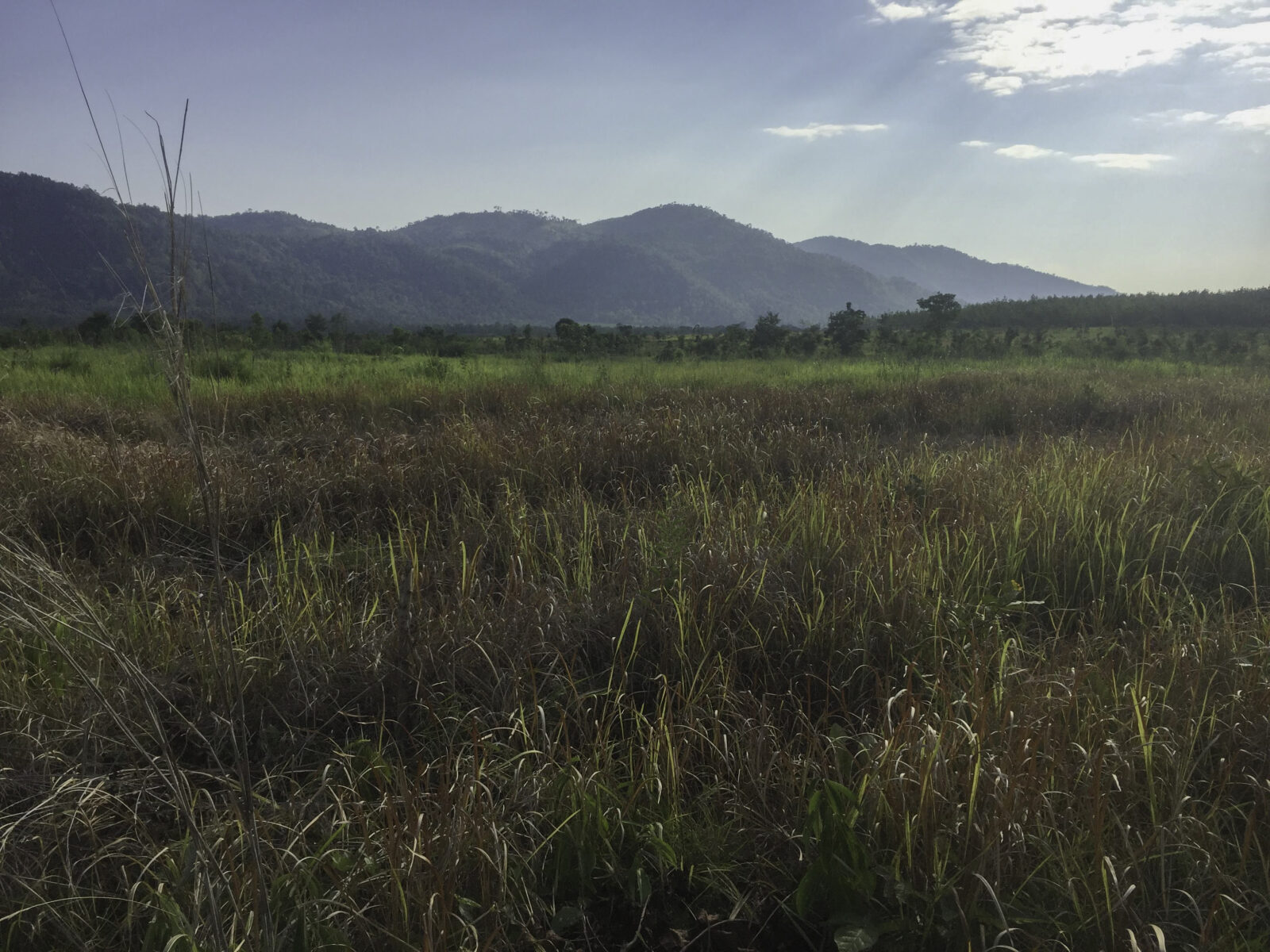 LZ X-Ray is one of the most legendary war sites in Vietnam. It was here that the United States had its first major battle with the PAVN, the first very violent round of a bout that would last ten more years. Much has been written about LZ X-Ray, the US Army 7th Cavalry, the commanders on both sides, and the Battle of the Ia Drang Valley. Because the site is so remote, it takes a determined visitor to get here. LZ X-Ray is situated 6 or 8 kilometers from the Cambodia frontier in southwestern Gia Lai province. The roads are bad. There aren’t houses, towns, or villages nearby. Pleiku is over 60 kilometers away – in this part of the country, Pleiku might as well be a million kilometers away. That’s the city, and it’s a long trip.

Visiting LZ X-Ray and Gia Lai province gives one a clearer picture of what happened here in 1965. There are numerous sites in this area due to its proximity to the Ho Chi Minh Trail and sanctuaries in Cambodia and Laos. Many of them are former Special Forces camps, and their mission was twofold: to recon the Trail and to train Montagnard troops under the Civilian Irregular Defense Group (CIDG) program. The Special Forces presence in this region preceded by several years the big bases that accompanied the American buildup in the later half of the decade.

Sometime in 1964, North Vietnam came to the realization that the southern National Liberation Front couldn’t alone achieve reunification. That same year, PAVN troops began streaming down the Ho Chi Minh Trail in regiment-size groupings. Hanoi probably also saw an open window in 1965. Since the 1963 coup and execution of President Diem the South Vietnam government was in a state of constant upheaval, with a series of coups and failed attempts at state consolidation undermining the ARVN’s ability to ensure security. After a string of NLF and PAVN small unit victories over the ARVN between 1963-65, Hanoi must have liked the PAVN’s chances against the South and the still relatively modest United States presence. RVN control of rural South Vietnam in particular was tenuous; NLF forces moved freely in the countryside. The Americans were at that time growing their presence in Vietnam, but the buildup would really intensify the following year. In the second half of 1965, RVN Prime Minister Ky was showing signs he might be more durable than previous leaders. 1966 might present Hanoi with entirely different opportunities and constraints.

One of those nearby Special Forces camps, Plei Me, is as good a starting point as any to the Ia Drang story. In October 1965, the PAVN crossed into Vietnam from Cambodia and besieged to Plei Mei. The strategy was to probe defenses in the area, have a go at Pleiku, and if successful, push for the coast. Split Vietnam in two and RVN capitulation is inevitable, the theory went.

The siege of Plei Mei lasted about a week in October 1965. It might have been an experiment: there’s much literature out there describing how the PAVN was engaging at that stage to better understand the tactics that the ARVN and its United States backers were using in Vietnam. ARVN reinforcements and American air power broke the siege, and NVA units dispersed west into the jungle between Plei Mei and Cambodia. It’s about this time that the NVA concluded that “grab them by the belt” tactics, i.e. very close combat, would make the other side think twice about employing artillery and air strikes to break up firefights. The United States and RVN tracked the retreating NVA units to the Cambodian border and realized that their movements focused on the Chu Pong Massif in the Ia Drang Valley.

General Westmoreland authorized US forces to chase the retreating NVA. The First Cavalry pursued them in a series of engagements that followed the retreat westward. Intelligence estimated that there were three PAVN regiments gathering near Chu Pong. Lieutenant Colonel Hal Moore and the 7th Cavalry were ordered to assault Chu Pong. Pre-selected landing zones at X-Ray and Albany would be utilized. The Battle of the Ia Drang Valley would be the Vietnam War’s first major set-piece battle with the PAVN, the first major US heliborne assault on an NVA position, and the first engagement to employ B-52 airstrikes on enemy ground forces in battle.

The assault at LZ X-Ray began before noon on 14 November. Shortly thereafter, US units began taking fire from the base of the Chu Pong Massif. The 7th Cavalry had essentially dropped itself in the middle of the NVA 66th Regiment’s position. Fighting intensified and soon the small landing zone was under heavy fire from three directions as more helicopters attempted to land remaining elements of the 1st and 7th Cavalries. One platoon got cut off from the LZ and remained isolated and surrounded for the duration of the battle. Over three days there were probes, charges, assaults from both sides, air strikes, human wave attacks, hand-to-hand combat, and artillery strikes on the perimeter of LZ X-Ray. The NVA made sure the combat was close. On Day 2, ground forces broadcast the code phrase “Broken Arrow,” reserved for US forces in immediate danger of being overrun, calling for all available air assets in South Vietnam to bomb targets around the perimeter of LZ X-Ray. Which they did.

After about 48 hours of heavy fighting and air and artillery strikes, the PAVN began melting away behind the Chu Pong Massif. The Landing Zone was secured, to the cost of about 200 US casualties and approximately 2000 PAVN killed or wounded. The next stage of the Ia Drang Valley battle would focus on LZ Albany, 2-3 kilometers north of X-Ray, in a series of ambushes that produced even higher casualty numbers.

LZ X-Ray is located in a highly remote and sensitive border area. I turned left off of one rough road, onto an even rougher road. I followed my GPS coordinates. A couple of minutes later, there it was. The Chu Pong Massif had been visible for a 10 minutes on Highway 14, and now I was in the middle of a cassava field, looking up at it. No evidence of the Battle of the Ia Drang, but it looked right. The First Cavalry fought in this same field. The Chu Pong Massif was some hundred meters in the distance, so I walked towards it. The cassava eventually ended and the brush now was wild and forbidding. I stopped. I was close enough.

The Ia Drang valley area is closed off for visitors and although it is located only around 50 kilometer south west of Pleiku, we do not recommend anyone to try to go there without a proper permit, this should be pursued by contacting the authorities in Pleiku.